Is Artificial Intelligence Changing the Defense Industry? The Answer Is Yes!

Artificial Intelligence continues to prove it will be a revolutionary technology. Each day, AI technology changes and evolves to offer more applications and challenge existing operational concepts; this is especially true in the defense industry.

While AI technology continues to grow, it has created a global “arms race” with many countries trying to drive innovation and be the first to harness its possibilities. For instance, China “has vowed to become the world’s leader in AI by 2030.” To achieve this goal, they have committed billions of dollars towards government-funded research.

In contrast, the United States Department of Defense (DoD) spent $7.4 billion on AI-related technology in 2017. With the DoD investing in and embracing AI, how will it change the defense industry?

The DoD and Silicon Valley: Project Maven and Google

The DoD, in its pursuit of AI innovation, has enlisted the help of Silicon Valley. Since the DoD will never be able to match the salary demands of the superstar techies who are employed by some of the valley’s largest companies, the DoD is establishing partnerships with these firms to tap into their high-priced and talented workforce.

One of the partnership programs to bring the Valley into the defense community is called Project Maven. Conceived in April of 2017, Maven’s mission is “to accelerate the DoD’s integration of big data and machine learning.” The project is the work of Robert O. Work, the former defense secretary. Along with Mr. Work, the group also includes Terah Lyons. Ms. Lyons is the executive director of the Partnership on AI, a group that includes many Silicon Valley businesses. Ms. Lyons previously served as a policy advisor to the U.S. Chief Technology Officer at the White House Office of Science and Technology.

One of the most significant relationships coming out of Project Maven was the DoD’s partnership with Google. The DoD worked with Google to develop AI technology to analyze drone footage automatically.

AI and Robotics: The Future of the Defense Industry

Robotics and its marriage to AI will probably be one of the most substantial impacts to the defense industry. The relationship between AI and robotics has the possibility to transform the battlefield and warfare for years to come. While the true benefits of AI and robotics are several years away, trends such as the development of an autonomous force are already being envisioned.

As the DoD invests in AI technology and innovation, which contractors are benefiting the most from this investment and how is it changing the acquisition process?

In the past, the DoD always relied heavily on the prime contractor community when it came time to award contracts for research and innovation. However, in the field of AI, this way of doing business may be changing. For example, more than “60% of the robotics-focused contracts in the President’s Budget for FY 2017 were awarded to non-traditional defense players and small prime contractors.” This trend of small primes will continue for years to come unless prime contractors prepare for a future in AI, especially in regard to AI and robotics.

With respect to acquisition, the DoD has streamlined the process for acquiring new technology such as AI by creating Rapid Capabilities Offices which aim to get new, cutting-edge technology in the hands of the military faster. In 2017, the National Defense Authorization Act accelerated this goal by performing some reorganization of DoD offices tasked with acquisition.

AI is not only changing the corporate world, it is also changing the face of the defense industry. As the DoD embraces AI and strives for innovation in the technology, new partnerships are being created, and applications such as robotics are being enhanced. Also, as AI takes a more significant place in the DoD contracting community, contract awards are being given to non-traditional, small primes over large prime contractors. For prime contractors who want to stay in the game, they need to develop and mature their AI offerings.

Are you a DOD contractor looking for the right teaming partner capable of providing the services or talent needed on your next contract? Contact Sentient Digital, Inc., a veteran-owned small business with a proven track record of serving the defense community. 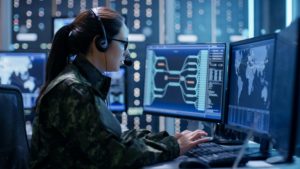